The plan was to spend five months in Oslo and say a long goodbye to what had been DHH’s hometown of 35 years. Instead, all we got was a month and a half of restricted freedom, self-imposed isolation and packing.

For the third time in four years we have sold surplus possessions, packed and sealed moving boxes and left a place we had called home. We seriously hope it was for the last time.

Since 2013 we have owned a flat in the middle of Oslo, some 5 minutes’ walk from the main railway station. From the start we rented it out, but originally the idea was that it would be our permanent home one day. We changed our mind when we got the chance to buy our mountain apartment on Mount Rigi, but we still decided that we wanted to spend a year in Oslo before settling in Switzerland full time.  We moved to Oslo on May Day 2019 and stayed until we left for our Asian winter tour in early November. We were supposed to return to Oslo in March, but as the corona situation took control we got stuck in Switzerland and could not get back to Norway until June. 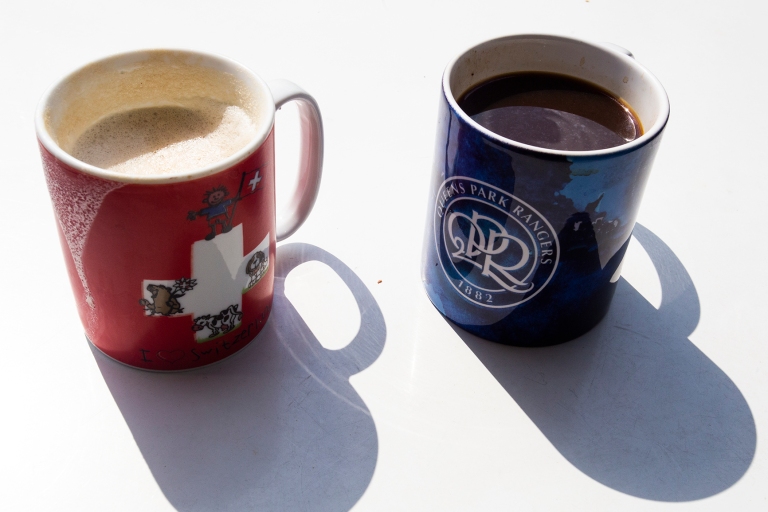 As a result, what was meant to be our last five months of Oslo city life were reduced to seven weeks. The first two we spent in isolation in the flat. We did go out for groceries – wearing a mask of course – and unlike the Spanish we did not get a fine for taking out the garbage. This period in mid-June coincided with a quite heavy heat wave, so we were very happy we had a small balcony where we could enjoy some coffee in the morning and some beer in the evening. When the mandatory isolation was over the self-inflicted isolation took over, for what was there really to do? As it turned out we were not very comfortable going anywhere at all. Restaurants and pubs were not really inviting, trams and tubes was something to avoid, museums and libraries felt like death traps and cinemas and football matches were out of reach. We spent most of our time sitting in our flat looking out.

The one thing we did do was taking a long weekend visiting DHH’s father in Trondheim, driving north instead of taking the train as we otherwise would have done. Living in the middle of Oslo owning a car has often felt like a bit of a waste, but now the fossil-burning monster was a real blessing to have around. We also enjoyed a few days of fjord boating with some friends who are lucky enough to own a boat, and even know how to use it!

There were friends to see and relatives to visit, but not as much as we had hoped for when we originally planned for a relaxing winter and spring full of town life and excitement. In the end our Oslo corona summer was mostly spent dismantling an apartment we had hoped to enjoy a bit more of. The furniture we had bought a year ago had to be sold off, which is not as easy as it sounds when you have a deadline for moving and need to shift everything at the same time. Luckily a lot of it was also bought second hand, so there was a limit to how much money we ended up losing. We experienced the same thing in Oslo as we had two years previous in London; not everybody you make an online agreement with actually bothers to come and pick up something he or she has agreed to buy!

One day the sofa disappeared however, and then the kitchen table and the bathroom shelf rack followed by the big corner lamp and the TV-bench. Our flat became less and less homely as the days went by. In the end, when the IKEA-boxes started piling up along the walls, it started to look like a building site even if there was no building going on. Three days before takeover we moved into a hotel close by, where we spent our evenings watching the town and the fjord form the 30th floor. We saw more of Oslo from our hotel window than we had during the entire 7 weeks stay in town.

In the end we were happy to go. Two hours before deadline on the last day before takeover, two young girls came for our big 200 by 160 cm bed. It was too big for the elevator, it had to be carried down five flights of stairs. It was a hard job, but not as hard as it had been for the two guys from the shop delivery service who had carried it up the same five flights in May the year before!

On Friday July 31st we were out. In the basement our car waited for us, ready packed and parked in the garage space that we had also sold. We headed north for another 7 weeks, to tour the north of Norway until September, when we will fly back towards Zurich to be permanent residents of Switzerland and never pack a moving box again in our lives! We hope!

In the summer 2019 we had various sons, daughters and grandsons visiting us in Oslo. They were all due back in 2020, but corona made sure all such plans had to be canceled.

A deeply shocked ES realizing that The Grandson is playing with the same toys she is! 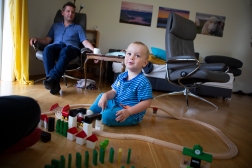 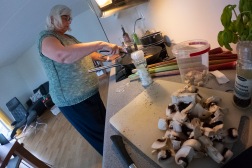 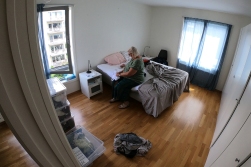 ES counting her stash. All the boxes by the wall to the left is wool about to be packed for Switzerland. 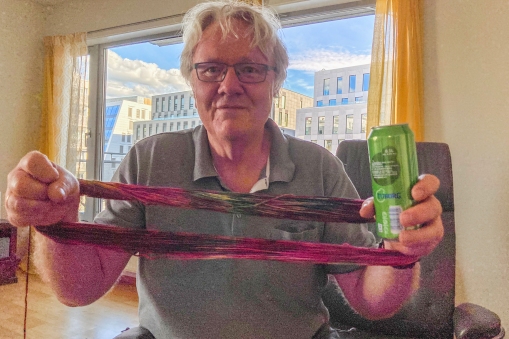 Is it possible to drink beer and help one’s wife bundle wool at the same time? The answer is yes, it can be done, but with some difficulty.

Out on the town. We were able to see some of our good friends, but nowhere near as much as we would have wanted.

Driving north! DHH takes a selfie by the side of a river between Oslo and Trondheim. 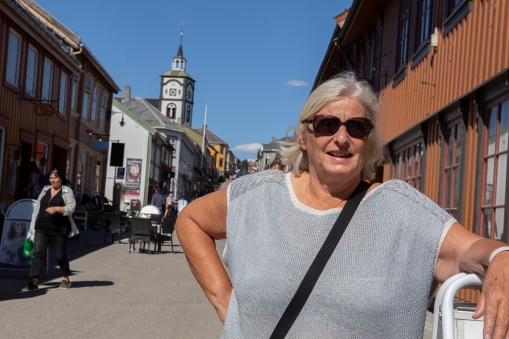 We made a stop in Røros, some 150 km south of Trondheim. This is a beautiful old mining town dominated by UNESCO-listed 17th to 19th century houses. 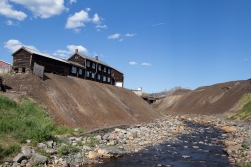 Innovation! A Røros phone-booth turned into a book-booth, a free and unbureaucratic mini library! 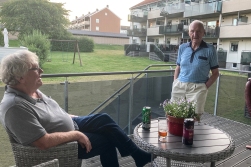 Visiting DHH’s father in Trondheim, and keeping the social distance! 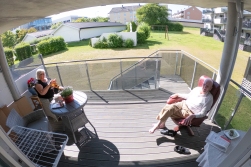 A mini cruise on the Oslo fjord with good friends, one of the few outings we were able to do during our semi-down locked summer. 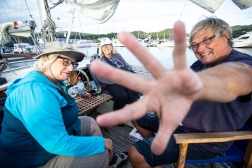 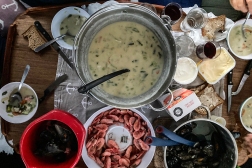 We hope our shipmates enjoyed our company. The ship cat however very much did not, she did her best to escape from the whole trip.

Home sweet home, while it was still ours.

Before the flat was put on the market it was styled to lure more protentional buyers. Our stuff was removed, and suddenly it looked like this! The picture is taken from the same angle as the one before.

Do you need a shoe bench, a bed, a sofa or some kitchen equipment? If you do then you have to contact somebody else, because our stuff was sold off in July.

During almost five years of travelling we have moved into, and moved out of, three different apartments. We have bought Ikea furniture and equipment and packed the remains in Ikea boxes. We should have been given honorary Swedish citizenships by now!

Home not so sweet anymore. No sofa, no proper table, no TV. All the place is good for is for ES to pretend to be at a meeting in Knitter Anonymous.

One comfort was that our favorite coffeshop next door was still open – and that social distancing was not a big problem.

Here we also find the Oslo Plaza Hotel where we moved in for the last three nights of our stay in town. 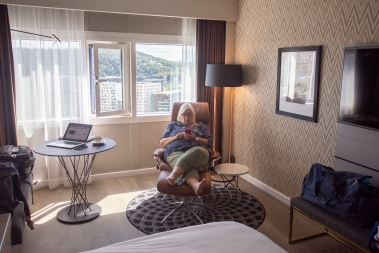 Room 3002 was a good bit cozier than the empty flat we by now had abandoned. 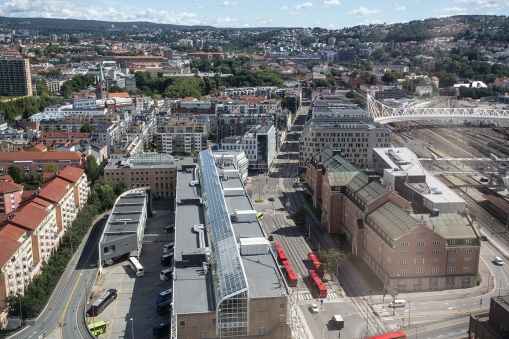 From our room on the 30th floor we saw more of town than we had during the rest of our seven-week stay. We could even see all the way home! Our apartment house can be spotted at the far end of the long glass roof that runs up the middle of the picture. 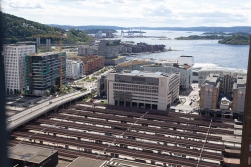 The leaning tower in the background is the brand-new Edvard Munch Museum, and the white sugar cube to the right of it is the top of the Oslo Opera House. It the foreground the Oslo Central Station.

ES celebrating our last night in town with white wine and mussels.

In September our stuff will join us back in Switzerland. Until then our dear boxes will have to endure two months behind lock and key in a storage centre.