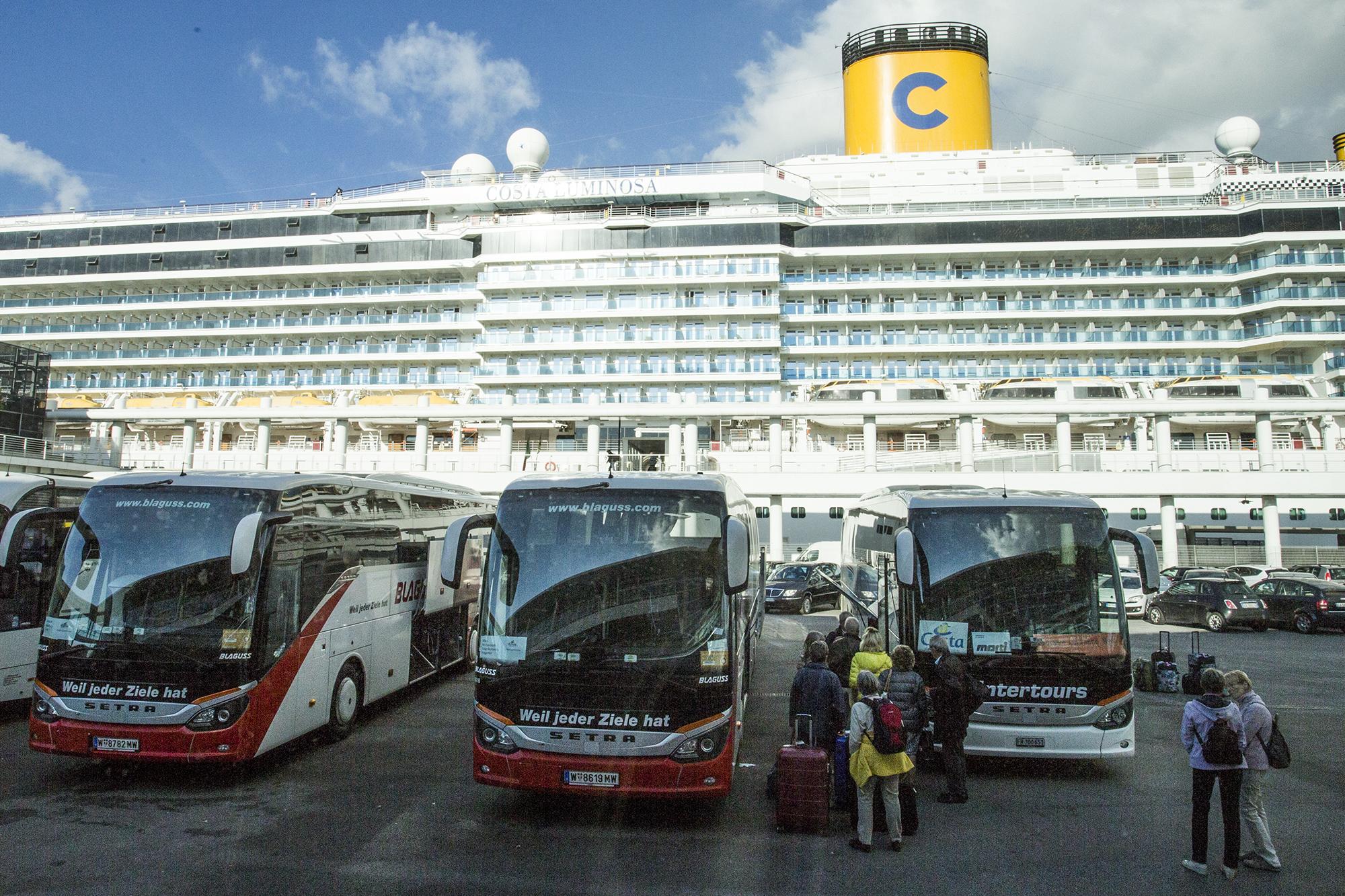 The cruise is over, and we have gone home. Or have we? We have no house as you all know, so we are per definition at home wherever we are. Fact is however, that we are now back in Europe and that «home» is no longer on the Costa Luminosa.

We got the «going home»-feeling entering the Suez Canal after leaving Jordan and Petra. The weather was cooler, the air was misty and grey, and we could feel the coming of the European winter.

We also felt a great disappointment, because travelling the canal was not as great as it used to be. Last year a second lane for the southern part of the canal was opened, and the Mediterranean bound convoys now travel this new and eastern route. This means we have desert on both sides as we slide north. The towns and settlements to the west are no longer visible, and the convoys no longer meet in the Bitter Lake like they used to. This is progress for transport we guess. It makes the crossing less complicated for ships, but also less interesting for tourists. Only the northern part of the canal was full of life as we remembered it. To enjoy the entire trip like we have done before, you have to travel south. Then you get to go thru the western lane and see a bit of Egypt.

From Port Said and the northern end of the canal we had a two-day trip to Civitavecchia, the harbour town of Rome. We skipped the great city all together however; we stayed near the port to have coffee, beer and lunch, and to put out some blog posts. Rome we can do later. For us, this day was about celebrating a great experience. Because whatever we have said about the elderly crowd and the juicy gossip on board the Costa Geriatrica, we have had a great time. We have loved (almost) every minute of it, and we will sure be back!

Then, what is next? We will spend a few days with The Daughter in Bern and The Father in Trondheim, then we will have Christmas in Interlaken, Switzerland and visit an old friend in Alicante, Spain. In between all this we will move to Norway and change our address from Bariswil to Trondheim.

More about all that in due time. This blog will continue to roll, but the posts will be fewer and the pictures less spectacular for a while to come! 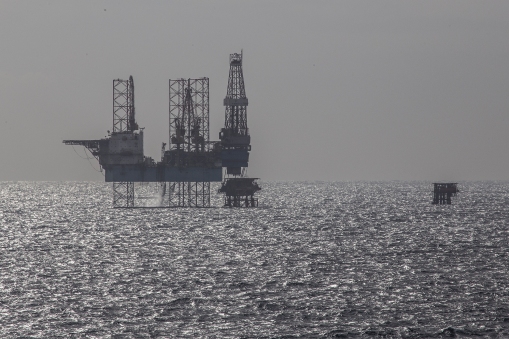 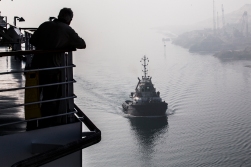 Entering the canal from the Suez side on an almost chilly December morning. We are kept company by a tug in case we should need help. 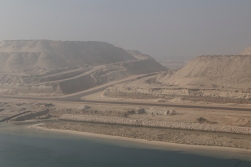 This was better entertainment in the good old days. Grey sand thru a grey mist is not very exiting to watch. 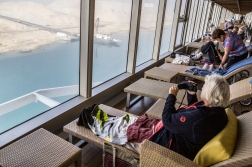 ES hoping for a sight worth seeing. She is on Deck Ten, combining her two on-board hobbies of knitting and filming. 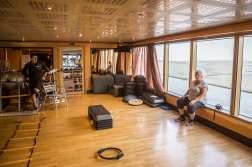 On our way thru the canal we had our very last session with The Coach in the gym. 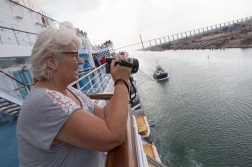 Passing the Mubarak Peace Bridge. This bridge restricts ships that can travel the canal to 68 metres of height. 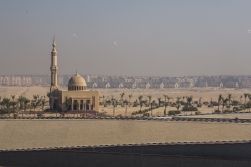 A Mosque on the Sinai side of the canal. 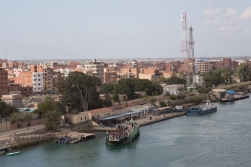 Finally we have come so far north that there is something to see from our windows. 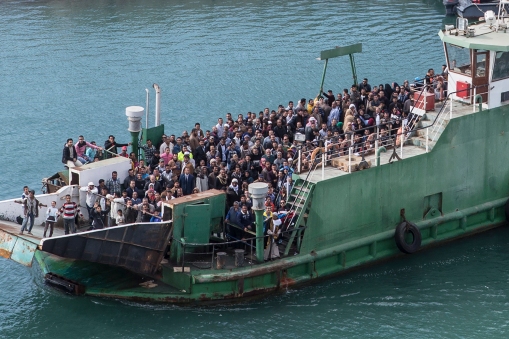 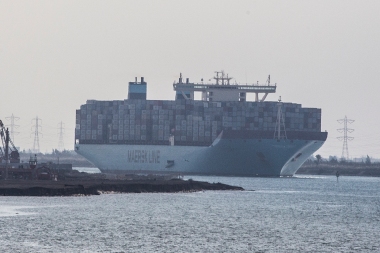 A huge container vessel following us along the route. 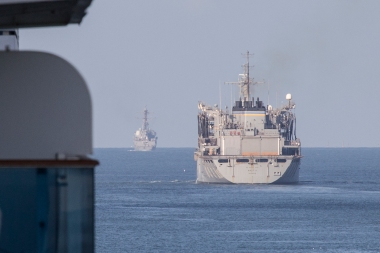 After 9 hours we reach the Mediterranean, together with our companions. 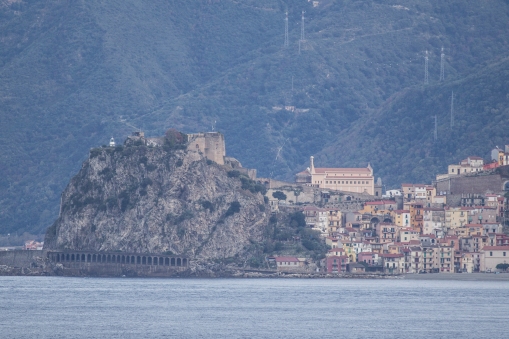 A day after leaving the canal we pass between Sicilia and mainland Italy. 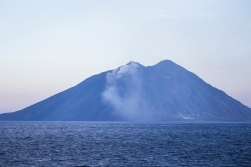 Passing the smoking gun, the eternally active volcano of Stromboli. 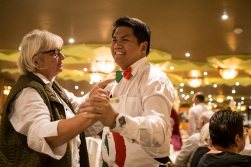 On the second last night, the dinner was part of an «Italian Party». ES ended up dancing with our chief waiter. 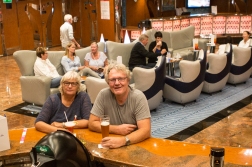 Having a few at the main bar by reception. We were not regulars, but on the second last evening we felt like paying the place a proper visit. 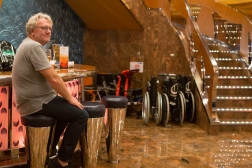 Yes, we are still on the Costa Geriatrica! By the bar were parked a number of wheelchairs, ready to take customers home if they were too drunk to walk on their own two crutches! 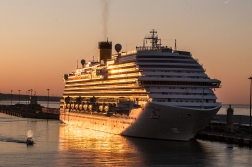 In the morning light of Civitavecchia, close to Rome, we met the our cousin the Costa Diadema. 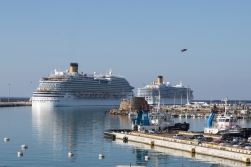 The Diadema (left) is twice the size of the Luminosa. One takes 2700 passengers, the other 5000! We are very happy we went with the smaller one! 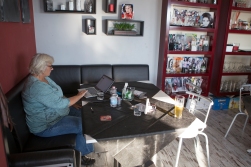 The webmistress putting up some blog posts in a café in Civitavecchia. 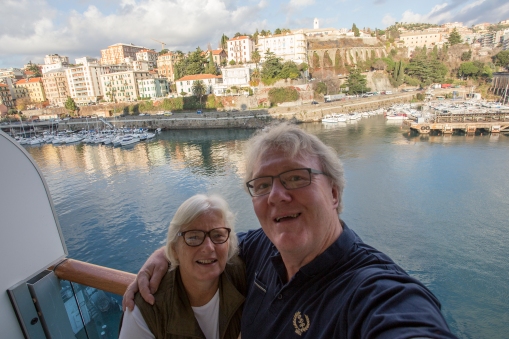 We have reached Savona, where we had started out some 14 weeks earlier. We left the ship first thing in the morning, so we just had time for one last selfie on our beloved balcony. 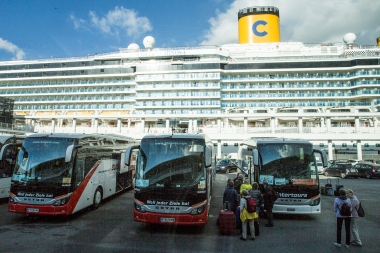 The buses lined up to take people home – those that had a home, that is! 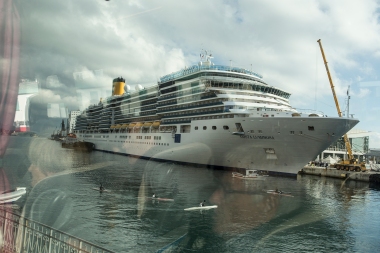 Our last glimpse of the Costa Luminosa, eeeh, the Costa Geriatrica, thru the bus window. 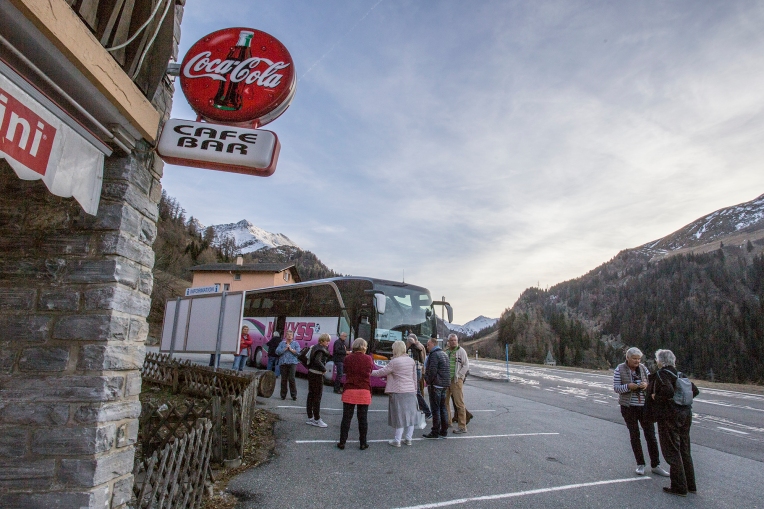 Back in the Switzerland, and back to regular life where we have to make our own dinners and change our bed linens ourselves.