A two thousand year old city, carved into the rocks of Jordan, was the biggest surprise of our cruise. It was the grand finale of our three months at sea, but when we started it was not even on the program.

Originally, our last stop before returning to Italy should have been the pyramids of Giza outside Cairo, but it was no big surprise when Costa decided that Egypt of today is not a safe place for western tourists. Giza was at some stage substituted by Crete and the Knossos, but halfway into the trip itself Crete was cancelled in favour of Aqaba, Jordan and the wonders of Petra.

Petra is, quite literally, a city carved in stone. The Nabataens, a people who ruled the area until they were concurred by The Roman Empire in AD 106, constructed the city between 2500 and 2000 years ago. The Romans developed the site further, building roads and expanding the theatre, among other things. Petra was important because of the trade routes, but the city declined when the routes shifted with the growth of Palmyra further north. Palmyra is one of the treasures of history that has been greatly damaged during the barbaric IS rule in parts of Syria.

Petra started to decline, and was also hit by nature. The city was abandoned after a big earthquake in 515, and was not reintroduced to the outside world until the Swiss traveller Johann Ludwig Burckhardt came there in 1812.

Today, as a tourist, you travel to Petra via the town of Wadi Musa. For us, coming by bus from Aqaba in the south, the trip takes two hours. From the bus station and the visitors centre you enter Petra by walking downhill into The Siq. This is a narrow gorge where you walk a path from tree to eight metres wide, flanked by vertical rock walls from 10 to 100 metres high. As The Siq winds it’s way thru the mountain the sunlight comes and goes, and the rocks glow like stone on fire wherever the light can find them.

After a kilometre or so the gorge opens up creating a narrow plaza, and here we are met by the most impressive of all constructions in Petra. The overwhelming el-Khazneh, in English called The Treasury, comes straight out of the mountainside like an installation from an Indiana Jones film. And that is exactly what it is, of course. Parts of Indiana Jones and The Last Crusade, was filmed here.

We continued down The Siq till it ended, close to a construction known as the Urn Tomb. The route we walked covers maybe two thirds of Petra. Further to the west there are numerous sights in other gorges and on other mountainsides. One of the downsides of cruise tourism however, is the strict timetable. We had to walk back, which meant uphill, and our ship would not wait for us if we missed our bus.

We were very glad we had done some exercise on the cruise. One and a half hour of uphill walking was something we had been looking forward to. On top of it all our personal trainer, known as The Coach, came whistling by, laughing. Not on foot, oh no, he had chickened out and rented a horse!

We could easily have done the same, because all over The Siq and the various sights we found horses, mules, camels and horse carts for rent. DHH wanted to take one, but ES refused. She had set her mind on walking all the way up – and she made sure we did it!

Our little post cannot do Petra justice; it is simply one of the most beautiful places mankind has ever created. The softly shaped rocks, the huge monuments, the ever shifting light and just the thought of human creativity dating several thousand years back; the sum of all this just blows our minds away! Our pictures do not do the place justice either; no camera technology in the whole world can recreate the images we are left with after our four hours visit. But if you have read this far then by all means look at the pictures, and then sit down and see if you can find a way to go there yourself before you die!

Standing in the deck of the Luminosa, looking east, we see the Jordanian city of Aqaba.

Standing on the same spot looking west, we see the Israeli city of Eilat. The other two countries fronting the bay are Saudi Arabia end Egypt.

A Syrian refugee camp near Aqaba. They are at this particular place to work local farmland. The population of Jordan has grown by 50 per cent since the war in Syria started. To keep the Syrians out of Europe some people want to «help them where they are», but to do that we need to fly in a few millions of new job opportunities. 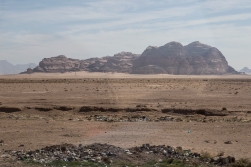 Matt Demon knows this desert well. This is where he ended up when he was stranded on Mars. 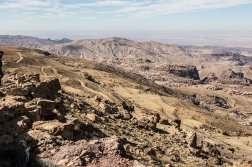 The town of Wadi Musa has a lot more to it than being the home of Petra. It was here Moses drew water from a stone when his people was thirsty, and it was here Lawrence of Arabia gathered an Arab army to fight the Turks during the First World War. 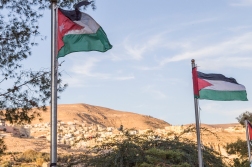 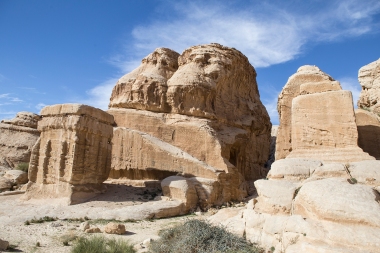 Petra. The two stone blocks are known as Djinn-blocks, and are believed to be grave memorials. There are all together 25 blocks like this in Petra.

The sun falls on a huge stone that is towering high above the entrance to The Siq.

The Siq is also a highway for horses and carts. They come at high speed, and we were very much instructed by our guide to get out of their way when we heard them coming. 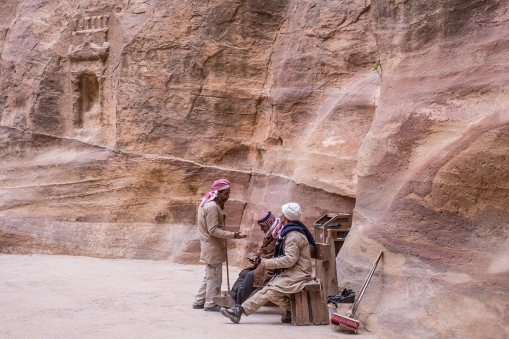 The cleaning brigade. The Siq is kept very clean and tidy. ES actually caught a local Arab woman dumping a plastic bottle 10 metres from a wastebasket. She was told in very firm words to pick it up and deposit it the right way!

In this area, water is an issue wherever humans settle. Here we see how The Nabataens cut their water pipes into the base of the mountain on both sides of their road. 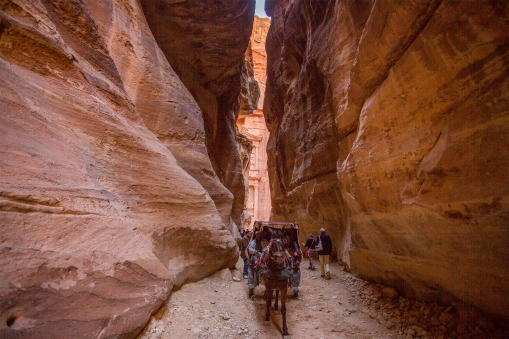 The Siq narrows down, but thru the opening we see an amazing building.

The Treasury might look like a bank building any government could be proud of, but it is probably a king’s tomb from about AD 50. The building continues into the mountain. When constructed, the builders started carving at the top, continuing downwards to ground level. 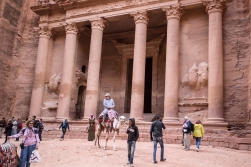 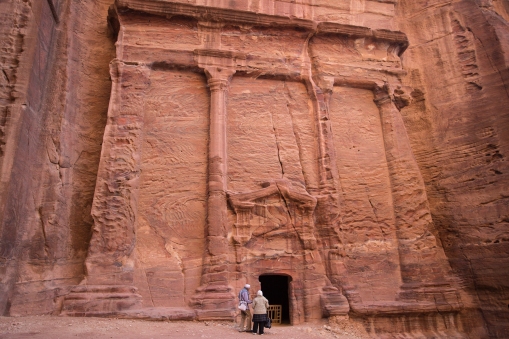 If you want a ride, there is always a camel or a mule around. If you say no, their owners do not insist. We found all local traders at Petra friendly.

Petra is threatened by wind and snow(!), winters can be bitterly cold here. The site is also threatened by humans. Until 1985, when the government relocated them, villagers were living in these tombs and caves. Today we, the tourists, are a bigger threat to this place than the local people. 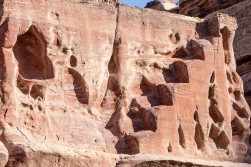 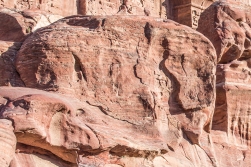 See the elephant? He is not in his full glory no more. Sandstone is relatively easy to carve, but it does not stand the test of time very well. 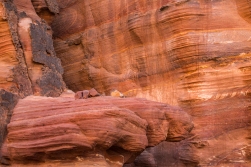 The iron in the mountains of Petra colours the stone red.

The man who wasn’t there. His legs can still be seen, but his upper body looks as it has been taking the stairway to heaven.

The theatre, built by The Nabataens and later redesigned by The Romans.

The Urn Tomb. The main buildings are again carved into the mountainside, but the base is a platform built up from the ground. Inscriptions indicate that this room was used as a church for a time in the 5th century, before Islam came to the area.

Making our way back uphill there were less people around, and we had moments when we were given the illusion of being all alone in history. 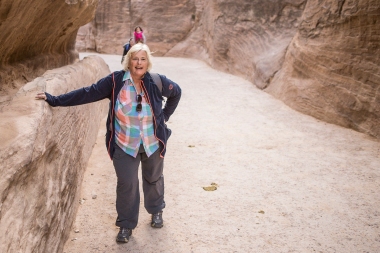 ES putting on a brave face.

The Coach and his friend passing us on rented horses. If anybody should have bothered to walk, it should have been him!

DHH pretending to be in control. We are almost up! 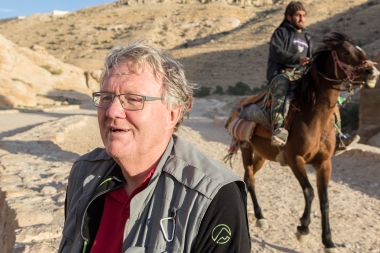 Well, we are not in control, not really. Whenever we turn our backs, there is somebody on a horse racing by!

Going back to our ship, enjoying a marvellous sunset from the bus window!

One thought on “A city carved in stone”