Ever travelled a fresh water lake on a 100.000 ton ship? If the answer is no, it might be because you have never travelled the Panama Canal.

The canal became the dream of the Spanish invaders as soon as they discovered the short distance between the Atlantic and the Pacific in todays Panama. All they had to do was to dig a ditch 80 kilometers long, a good bit easier, they thought, than to struggle their ships down the east coast of South America and then up again on the other side.

The French tried to do the job in the 1880ies, but they were totally out of their depth. The engineers that had built the Suez canal had to give up after 20 years – creating bankruptcies, political scandals and causing tens of thousands of workers to loose their lives. The French thought Panama was as easy as digging thru the flat and dry deserts of Egypt. They were miserably mistaken.

The Americans however, finished the job in less than ten years. They built locks to lift the ships 26 meter up from the sea level, and they created a brand new little country in the process. Panama used to be a part of Colombia, but with a little help from their friends the province suddenly became a country of it’s own. Accidentally, the government of this new country turned out to be very US-friendly and allowed the USA to treat the canal zone as their own territory for the next 85 years.

With the Costa Luminosa, crossing the canal took us 10 hours. We slide into the locks by the help of locomotives, three on each side of us, running on cog wheel tracks the full length of the lock basins. The locomotives do not pull our ship, they make sure we stay centered in the narrow locks. The Luminosa is a «Panamax», a vessel tailor made for the Panama Canal. She measures 294 meters in length and is 32 meters wide. Inside the lock the margin is 5 meters in length, and to each side it is less than one.

We had an exiting day. We could sit on the balcony outside our cabin and watch the work being done a few meters below us. As the men and the machines helped us along, we were close enough to chat with the workers and tell them where we were heading and where we had been.

After having gone up the three locks at Gatun on the Caribbean side we started our run thru the jungle. We would glide at pleasant speed of 9 knots across the Gatun Lake, thru the forest that for so many years stopped the European engineers from doing what they tried to do. For us the forest is a green beauty, for the workers 130 years ago it was a green hell. They died in thousands from malaria and yellow fever, and no matter how many ditches they dug, the rainy season landslides came without mercy and filled them up again! Year after year after year again!

Reaching first Pedro Miguel and then Miraflores at the Pacific end of the lake, another three locks took us down again. Soon after that we passed the skyline of Panama City and entered open water. From Miraflores we could also see the three brand new locks, opened for traffic just three months earlier. They can take even bigger ships, so the «New Panamax» ship size now is 366 meters in length and 49 meters in width.

For ES, this was the first time. For DHH however, travelling the canal is some sort of a family tradition. He had been here before, and his father, The Old Man of the Sea, even before him again. We have pictures from The Fathers first Panama crossing way beck in 1946. The locomotives look different now, but the brick buildings are the same.

It was an adventure for him then, and it still is an adventure for us today. But being a passenger on a cruise ship, we are blessed with not having to do any of the work on the ship. We would lie if we said that we did not enjoy just that!

Gatun, Pedro Miguel and Miraflores consist of sets of two parallel locks. The best pictures you always get of the other ships, crossing with you. 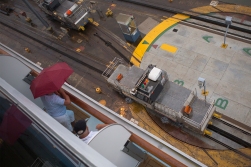 We entered the canal on a rainy morning in late September. 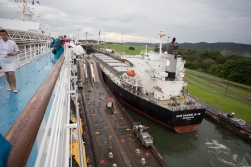 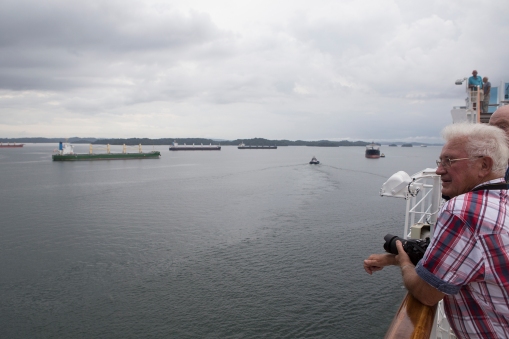 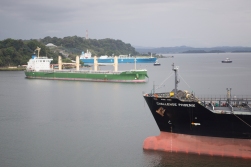 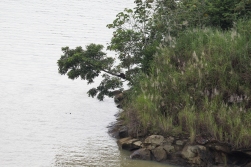 The jungle looks great to us, but proved lethal to the workers of the late 19th century.

Crewmen on the Interlink Equity, relaxing on deck while travelling with us thru the canal. 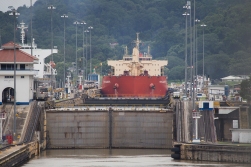 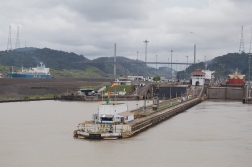 Leaving Pedro Miguel, heading for Miraflores. The blue colored vessel to the far left is still on the level of the Gatun lake. She is on her way to the brand new set of locks made for the bigger ships. 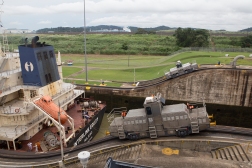 The Miraflores Locks. The locomotives follow the ships down, keeping them centered in the narrow basins. The blue vessel in the background is still on Gatun level, heading for another set of locks. 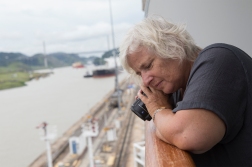 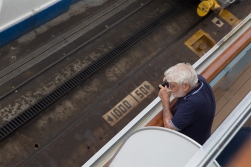 A fellow passenger from the Luminosa taking pictures from his balcony. The numbers below indicate how far we have gone in the lock. The basin is 1050 feet long (about 320 meters) but the ships can be no longer than 294 meters. 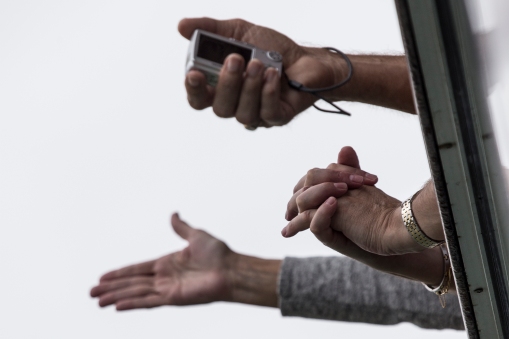 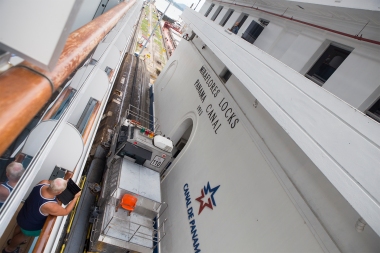 As we leave Miraflores, we pass the brand new Cocoli Locks that can take ships up to 366 meters long. These locks were put in use just three months earlier.

The Interlink Equity heading for The Bridge of the Americas and the Pacific Ocean. 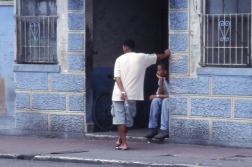 Still Colon. The taxi driver was not happy that DHH wanted to go out of the car for pictures, he followed him around with a finger in his pocket pretending to have a gun.

The Pedro Miguel lock in 1946, when DHH’s father passed the canal for the fist time. 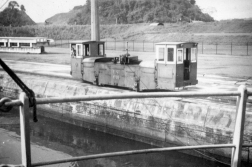 Still 1946. The locomotives looked different, but had the same function as today. 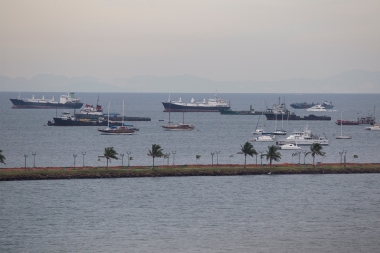